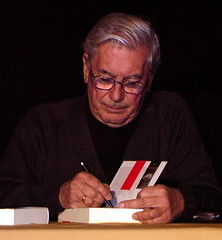 END_OF_DOCUMENT_TOKEN_TO_BE_REPLACED

Mario Vargas Llosa: In Praise of Reading and Fiction (2010) 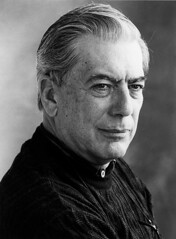 I learned to read at the age of five, in Brother Justiniano’s class at the De la Salle Academy in Cochabamba, Bolivia. It is the most important thing that has ever happened to me. Almost seventy years later I remember clearly how the magic of translating the words in books into images enriched my life, breaking the barriers of time and space and allowing me to travel with Captain Nemo twenty thousand leagues under the sea, fight with d’Artagnan, Athos, Portos, and Aramis against the intrigues threatening the Queen in the days of the secretive Richelieu, or stumble through the sewers of Paris, transformed into Jean Valjean carrying Marius’s inert body on my back.

Reading changed dreams into life and life into dreams and placed the universe of literature within reach of the boy I once was. My mother told me the first things I wrote were continuations of the stories I read because it made me sad when they concluded or because I wanted to change their endings. And perhaps this is what I have spent my life doing without realizing it: prolonging in time, as I grew, matured, and aged, the stories that filled my childhood with exaltation and adventures. END_OF_DOCUMENT_TOKEN_TO_BE_REPLACED

END_OF_DOCUMENT_TOKEN_TO_BE_REPLACED

Jean-Marie Gustave Le Clézio: In the forest of paradoxes (2008) 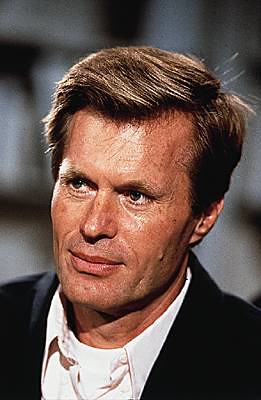 Why do we write? I imagine that each of us has his or her own response to this simple question. One has predispositions, a milieu, circumstances. Shortcomings, too. If we are writing, it means that we are not acting. That we find ourselves in difficulty when we are faced with reality, and so we have chosen another way to react, another way to communicate, a certain distance, a time for reflection.

If I examine the circumstances which inspired me to write–and this is not mere self-indulgence, but a desire for accuracy–I see clearly that the starting point of it all for me was war. Not war in the sense of a specific time of major upheaval, where historical events are experienced, such as the French campaign on the battlefield at Valmy, as recounted by Goethe on the German side and my ancestor François on the side of the armée révolutionnaire. That must have been a moment full of exaltation and pathos. No, for me war is what civilians experience, very young children first and foremost. Not once has war ever seemed to me to be an historical moment. We were hungry, we were frightened, we were cold, and that is all. I remember seeing the troops of Field Marshal Rommel pass by under my window as they headed towards the Alps, seeking a passage to the north of Italy and Austria. I do not have a particularly vivid memory of that event. I do recall, however, that during the years which followed the war we were deprived of everything, in particular books and writing materials. For want of paper and ink, I made my first drawings and wrote my first texts on the back of the ration books, using a carpenter’s blue and red pencil. END_OF_DOCUMENT_TOKEN_TO_BE_REPLACED 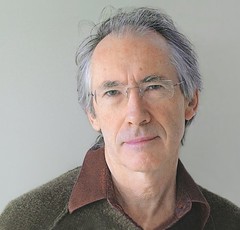 My most sincere congratulations to all the graduates here. You made it through. You have a degree from a truly excellent institution. A lot of reading, writing, lying in bed (thinking, of course). And now you stand on one of life’s various summits. As you know, there’s only one way off a summit – but that’s another story. Don’t be taken in by those who tell you that life is short. It’s inordinately long. I was into my twenties when my mother astonished me by saying wistfully, ‘I’d give anything to be forty-five again.’ Forty-five sounded like old age to me then. Now I see what she meant. Most of you have more than 20 years before you peak. Barring all-out nuclear war or a catastrophic meteor collision, a substantial minority of you will get a toe in the door of the next century – a very wrinkled, arthritic toe, but the same toe you’re wearing now. You have a lot of years in the bank – but don’t worry, I’m not here to tell you how to spend them.

Instead, I would like to share a few thoughts with you about free speech (and speech here includes writing and reading, listening and thinking) – free speech – the life blood, the essential condition of the liberal education you’ve just received. Let’s begin on a positive note: there is likely more free speech, free thought, free enquiry on earth now than at any previous moment in recorded history (even taking into account the golden age of the so-called ‘pagan’ philosophers). And you’ve come of age in a country where the enshrinement of free speech in the First Amendment is not an empty phrase, as it is in many constitutions, but a living reality. END_OF_DOCUMENT_TOKEN_TO_BE_REPLACED

Stephen Colbert: Have your own standards (2015) Good morning. Oh, what a day. What a lovely day. It’s a pleasure to be addressing the Wake Forest graduating Class of 2015. I want to start by thanking the administration and the Trustees for inviting me to speak. I want to thank them for giving me an honorary Doctorate of Humanities. I’m a huge fan of humans. And I have to thank them for this thing around my neck. There’s nothing you want on a chilly day like today than a nice scarf.

I especially want to thank the University president, Nathan O. Hatch, known to you as Nate Dawg, Natty O, the Hatchet, Hatch Adam, Sen. Orrin Hatch, Angel Dust. And I only made a couple of those up.

Of course, we mustn’t forget the parents, who, to get you students to this day, have sacrificed so many things, primarily money. I’m sure there are other things they’ve sacrificed, but I’m gonna guess that money’s the one they bring up most often.

Most importantly, congratulations to you, the Class of 2015. You did it. END_OF_DOCUMENT_TOKEN_TO_BE_REPLACED